Yet Another Rail Trip...

Prelude
This trip was planned 70 days in advance on April 26th 2011 and the reason was my Indian Council of Medical Research PhD scholarship exam. I’ve had also made a plan to visit Shillong to meet Lynda but due to lack of time I cancelled it. Also traveled to Kerala (Tellicherry) via Chennai, traveled by Coromandel express from Howrah to Chennai Central and then by  Chennai-Mangalore mail to Tellicherry.  Met Vimal, an IRFCA Chennai member at Chennai Central Station.  Finally, on my way to Mumbai, at first I decided to travel via Goa by Goa expess up to Pune and then the Queen of Central Railway, the Deccan Queen to Mumbai but scrapped that plan and decided to travel by Netravati expres to Mumbai from Kannur, in Kerala.

On Board Coromandel express A.K.A ‘Ambulance Express’

Well…I’ve had heard a lot about 12841 Coromandel express which runs between Howrah (Kolkata) and Chennai Central like the speed, punctuality, cleanliness, and, of course, one of the flagship express trains of the Indian Railways and this is the reason why I didn’t think twice before traveling to Tellicherry in Kerala via Chennai.  Upon canceling my trip to Shillong, I decided to visit Kerala immediately after my exams, albeit I wanted to spend some time in City of Joy.  This train departs Howrah station at 1450 hrs and arrives at Chennai Central next day at 1715 hrs, covering 1661KM in 26 hours 5 minutes at an average speed of ~63KM/HR.   This is probably the fastest train between these cities!!  Interestingly, this train is also known as ‘Ambulance Express’ because a lot of cancer patients travel on this train to go to Christian Medical College in Vellore near Chennai. Here's the photo of Coromanel expess. Photo by Bharat Moro. 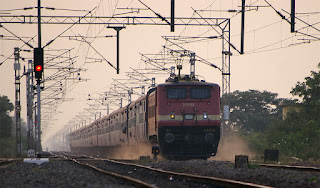 I reached Howrah station well before the departure time ~ 1300 hrs and I saw and was very much expecting huge crowd at the entrance of the station.  Upon entering the station after negotiating through crowd with my backpack I felt much relieved and as usual on seeing trains I forgot all my worries.  I guess it wouldn’t be incorrect to say the trains act as an anti-depressant for me!!!  I looked at the departure indicator but my train was not scheduled yet, I also looked at the arrival indicator and saw Gitanjali express from Mumbai had already arrived and some yet to arrive trains.  Albeit my train was not scheduled but I got a feeling that the train will depart from platform 20 and I was correct.  Around 1400 hrs the train was shunted by a derated WDM-2 class loco of Kharagpur shed. The train looked clean, Center Buffer Coupling (CBC) rakes, my coach was 9th from the loco. I saw a lot of people getting ready to board the train and in fact some waitlisted passengers too boarded the reserved carriages all going to Chennai but I was not surprised because I was told that this train runs full all 365 days. After settling down at my berth, it was too difficult to move out due to huge crowd blocking the entire passageway. The train was undoubtedly hauled by a WAP-4 class loco of SRC shed.
Right at 1450hrs the train started to roll out of Howrah. We crawled for a long time but as soon as the train changed to mid (bi-directional) line, the loco pilot/engineer proved why this train is called the flagship train! I am sure we were cruising at 110KMPH. We over-took a lot of suburban trains and also express trains however being a CBC train the jerks were inevitable but it was fun!!  The train maintained over 100KMPH mark until we reached our first scheduled stop i.e. Kharagpur Jn. for a 5-min halt.  We pulled in at sharp 1630 hrs (115km)!! Although I was happy traveling on this train, I didn’t forget that this very train had met with a huge accident not too long ago. It crashed while traveling at 110KMPH in the state of Orissa killing some 15 people and injuring a lot.  We soon accelerated out of Kharagpur Jn., and while we were still crawling out, I spotted Howrah bound Falaknuma express from Secunderabad entering Kharagpur Jn. hauled by a WAP-4 class loco of SRC shed.  After we left Kharagpur Jn., we were back at 110KMPH speed and even on sharp curves the train didn’t slow down.  I was really enjoying it but unfortunately couldn’t go at the door as it was already occupied by waitlisted passengers. This is probably the only train ride where I couldn’t be at the door even for a few minutes!!
The next scheduled stop was Balasore and I was not surprised to see we entered on time at 1800hrs for a 2 minute stop and immediately after we left Balasore, we were back at top notch and I felt this time it was even more aggressive. I was sure the speed was slightly but definitely over 110KMPH.  Soon we crossed over to Orissa state and passed through Jajpur Road Station at 110KMPH. This is the exact spot where the train met with an accident. I was little nervous!!  Here's the photo. Note: I didn't click this photo. 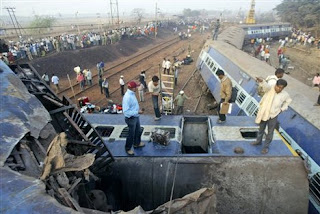 It had become too dark to see anything outside however I was lucky to get a glimpse of Chilka Lake under full moon night while the train was on top notch and again on sharp curves it maintained max speed throughout. The train passed through some major stations like Cuttack, Bhubaneshwar etc. running on time but I was fast asleep.  I woke up around 4:30AM to see the train entering Vizag.  This is the reversal point for this train, SRC WAP-4 loco got detached and another WAP-4 of AJJ shed got attached at the other end of the train. After about a 30 minute halt, we accelerated out of Vizag.  The run from Vizag to Chennai was disappointing with lot of speed restrictions and the speed, I guess, never crossed above 100KMPH yet the train maintained its schedule. The next major halt was Vijaywada Jn. however before entering the station; we took a long unscheduled halt of 25 minutes right outside the station, probably due to non-availability of platform. Here I took my lunch consisting of only rice and dal. It was very scrumptious and very, very cheap!!  This is one of trains which run non-stop between Vijaywada and Chennai Central, covering the distance of 431KM in about 7 hours.  I was hoping for some high speed run but again this never happened till we reached Chennai.  Meanwhile I called Vimal, my very good friend and an IRFCA member from Chennai, about my arrival. My co-passengers were all Tamils, probably from some political party as they were constantly talking about the political issues in Tamil Nadu. I was able to construe their conversation thanks to my knowledge of Malayalam language.
We soon entered the suburbs of Chennai running on time. It is only here I thought the train was running above 100KMPH. At sharp 1715 hrs we entered Chennai Central, I was kind of sure that we wouldn't reach on time but it happened even after a lot of speed restrictions after Vizag. I met Vimal who arrived after 15 minutes. I really thank Vimal for coming to Chennai!!  My connecting train to Telliherry, Chennai-Mangalore mail, was scheduled to depart at 2025 hrs so I had a lot of time to spend in Chennai and to do some railfanning with Vimal.

This is not going to be too long!!  After spending some good time in Chennai it was time to board Chennai-Mangalore mail to Tellicherry. We (Vimal and I) reached Chennai Central at 1950 hrs and I saw the train was already scheduled. The loco link for this train was a WAP-4 of AJJ shed. At 2025 hrs, the train started roll out of Chennai Central station and I bid goodbye to Vimal and thanked him again for coming to see me at such short notice. On board I saw a lot of local commuters traveling on this train up to Trivallur and/or Arakonnam (AJJ), a better choice than traveling in suburban trains!! As the train gained speed through the suburbs of Chennai, the only thing on my mind was to sleep and I was tired hence I decided to sleep immediately after crossing AJJ.
Woke up next day to see the train entering Calicut (Kozikode), one of the major cities in Kerala. I became nostalgic because I used to travel to Calicut almost every weekend while I was doing my post graduation!  Tellicherry was not too far, approx 68KM more to go from here!! I finally managed to be at the door of the train for some railfanning and observation. I spent good 2 hours at the door with my backpack till I reached Tellicherry.  I spotted a lot of trains with diesel power locos as this section is still non-electrified. At 0900 hrs, the train pulled into Tellicherry station. Tellicherry is a small but beautiful town 20KM south of Kannur, the district headquarter. Albeit notoriously well-known for its political rivalry yet a very safe place to be!  After disembarking I didn’t think twice before making a move to my house by bus. I was very tired! Thus ending my journey from Calcutta to Tellicherry via Chennai.

FYI……if you ever happen to travel on a private bus in Kerala make sure you carry your seat belt!!
Posted by Deepesh Soni at 1:57 PM 0 comments