This was a short trip to Kolkata for my PhD exams and also a railfanning trip which I took July 19th 2012; honestly I was more excited for my railfanning part in this trip than my exams. I’ve had some other plans, as well but they didn’t turn out as I wanted. I Boarded Howrah bound 12151 Samarsata express from Mumbai for an unusual 54 hour train ride instead of 35 hours…… and how did this happen??  Please read on…!!!! :)

We reached Lonavla around 7:55AM where the thee banker locos got isolated. I was hoping to reach Pune around 9:15AM but that didn’t happen. Between Lonavla and Pune, my train was given a lot of unscheduled halts for Pune bound trains to overtake. It was only after 10:30AM we entered platform # 1 of Pune Jn.  At Pune I met Archit Goel after so many months and I was very happy to see him. Meanwhile the power of my train, the WCAM-3 21934 got detached and, as expected, a UBL WDG-4 road# 12311 loco came in to take the charge of my train up to Manmad with a reversal at Daund Jn.  After leaving Pune Jn., for the first time I was happy to see the speed in excess of 90KMPH and the WDG-4 pulled my 24-coach train with ease!! We reached Daund Jn. in less than 2 hours where my train reversed after a 20 minute halt. As we were exiting Daund, I spotted Bangalore bound Udyan express with its usual KJM WDP-4 loco entering Daund Jn. 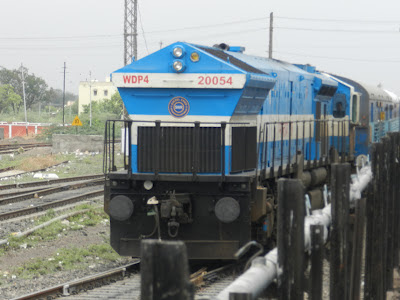 The lunch was served after Daund but my mom had packed some home food so decided to avoid lunch served on train. Unfortunately after Daund, we took quite a lot of unscheduled halts due to single line section. At one such halts, I spotted the Mumbai bound 12102 Janeshwari express from Howah hauled by twin Pune WDM-3A class locos and Pune bound Jhelum express from Jammu, hauled by twin GTL WDM-3Ds. The Jhelum express overtook Janeshwari express, for the first time I saw a non-superfast express overtaking superfast express train. 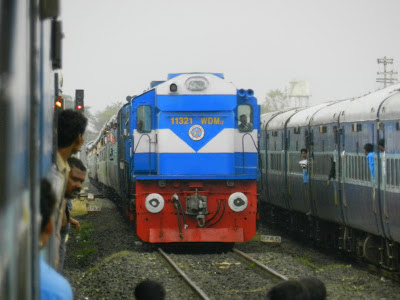 I was expecting to reach Manmad Jn. around 5PM but we entered only after 6PM. This stop was very important because from here the train will have all clear high speed run and also I was able to determine the approx. arrival time at Howrah which was around 11PM next day. The UBL WDG-4 loco got detached and an SRC WAP-4 road# 22743 loco was brought in to haul my train all the way to Howrah. I also spotted Bangalore bound Karnatak express from New Delhi hauled by twin ET WDM-3A locos entering Manmad Jn. After we departed, there was no stopping to my train and it constantly maintained the speed of 110KMPH, even crossing this mark many times. I, as usual, was by the door enjoying the speed and at this time I’ve had completed forgotten as to why I was going to Kolkata!! The train hardly stopped at intermediate stations and even at Nagpur the halt was not more than 10 minutes.

Next morning I was eagerly waiting to reach Raipur as my cousins were waiting for me with some homemade food. The train entered Raipur Jn. around 7:30AM where I met my cousins and their family after a long time. The train took less than 2 minutes halt as expected and while departing Raipur, I saw Raigarh bound Gondawana express entering Raipur with BSL WAP-4 class loco. It was raining heavily in Raipur yet my train sailed at 110KMPH without any difficulty. The next stop was Bilaspur which we reached in less than 2 hours, maintaining good speed throughout. I spotted quite a lot of freight trains on this section which is not unusual.
I was quite chafed by my co-passengers behavior who were apparently some railway employees working at Kharagpur Jn. as ticket vendors. They were, not to mention, traveling for free in my coach. I really hate such imbeciles who travel for free on trains. Besides, all of them were heavy snorers so it was very difficult get sound sleep especially when all 4 of them snored together. I started to get real world-weary and couldn’t door plate as it was getting too dark too soon. Luckily I had some air crash investigation videos on my lappy which helped me a lot to pass some time. We passed through some major stations like Jharsurguda Jn., Rourkela Jn. etc with minimum possible halt time.

After Chakradharpur, the train got diverted on Purulia-Adra route and for the first time I saw heavily armed policemen with AK-47 rifles and bulletproof jackets and helmets patrolling the train as this region is very dangerous to travel especially at night time due to heightened terrorist activities. Kudos to these policemen/paramilitary forces for doing wonderful job!! Few minutes after departing from Chakradharpur, we came to an abrupt stop for over an hour at a small station called Kunki for no apparent reason. Later I learned that there was a loco failure of a freight train which was running ahead of us. This additional 1 hour delay proved to be very expensive! I was expecting to reach Kharagpur Jn. around 8PM had it not been for this delay but we reached only after 9:30PM which meant reaching Howrah after 11:30PM. Nonetheless, the speed of the train was good considering the fact that we were passing through a very notorious area. As we were nearing Kharagpur Jn., the train slowed down and stopped numerous times due to non-clearance of line. This was very frustrating because it was already 10PM and we didn’t enter the Kharagpur station yet. It was only after 10:30PM we reached Kharagpur Jn. Here almost everybody disembarked and I was apparently the only passenger in the entire coach. I was feeling very jaded and I knew it will take more than 2 hours to reach Howrah so I decided to sleep off. I finally managed to get some good sleep without being perturbed. I woke-up to see the train marooned again right outside Howrah station due to non-availability of platform which is very usual. After 10 minutes halt, the train moved onto platform#21 of Howrah station around 1:30AM. I was very tired but also relieved that I finally reached Kolkata after 54 hours of train ride. Luckily got some good sleep before my exams. I thank my good friend Apurva Chaudhary from Kolkata for coming to receive me at the station at 1:30AM thus ending my 54 hours long train ride!!